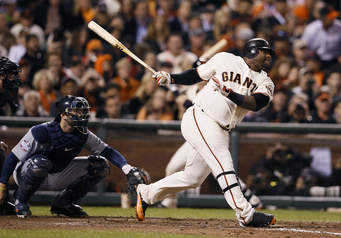 Superstitious behavior – we have all seen it in humans.  A series of seemingly irrelevant actions repeated as a ritual before an important event.  In sports, it is very common, as shown by:

Pablo goes through several different behaviors – tapping his shoes with his bat, adjusting his gloves, tapping his helmet, and so on, until he finally is ready to take a pitch.  Why does this happen?  And what does it have to do with positive training?

When we analyze superstitious behavior in humans, we can see that the superstitious behavior (which can easily be done consistently) occurs before a different behavior (that is more difficult to control) the outcome of which is very important. The ritualistic tapping of shoes and helmet,that can be done in a particular way, occurs before the swing of the bat, which may or may not connect with the pitch.  If the batter successfully hits the ball after performing a certain ritual, he may start to believe the tapping of shoes and helmet caused the successful hitting of the ball.

That is an example of Thorndike’s Law of Effect, which, described simply, is that any behavior followed by a desirable consequence is likely to be repeated in the future.

That ritualistic behavior doesn’t have to have any real effect on the batter (or the pitcher) it just has to occur before the event that reinforces it – the successful hitting of the ball.

In a similar way, we can train our animals to do “superstitious” behaviors by accident.  It is something to keep in mind when using a marker – a signal, such as a click, that marks the behavior we want and also tells the animal something good is coming.  When I click the clicker, I have a certain behavior in mind I am trying to mark.  It may be lifting a paw, for example, as the start of training a handshake trick.

I know what I am trying to mark, the dog does not know.  I may start clicking and treating paw lifting in the dog, and not notice that the dog is doing another action before or at the same time as paw lifting that also is being marked by my click.  Perhaps the dog turns his head to one side and then lifts one paw, which I click.  Repeat this a few times, and the dog may “believe” that the behavior I want is the head turn and then the paw lift.  Not necessarily a bad thing, but not what you intended.

If you are trying to train a precise action or sequence of events, like a formal retrieve, you do need to pay attention to the possibility of inadvertently training “superstitious” behaviors.  For example, it is easy to reinforce chewing on the retrieving dummy by mistake, when you want to the dog to simply hold the object in his mouth.  Remember, you can always start training the behavior over again from the start, if you run into this problem. It may also help to us a different object for the retrieve, when you retrain, while paying careful attention to avoid reinforcing unwanted actions.

On the other hand, choosing and training a ritual sequence of behaviors that occur before the start of a performance can be a very good idea.  The desirable consequences for the batter are actually more than just hitting the ball successfully.  The ritualistic behavior can also have the effect of calming and focusing the player on the task at hand.  The difference is using the ritual on purpose to help warm up the muscles and the mind for the task to come, and not allowing the ritual to take on undue importance.

The same can be true for you and your dog at a performance event, such as agility, freestyle, or obedience.  Predictability in a sequence of events that have been positively reinforced can give you and your dog confidence and calm.  This concept also applies to potentially stressful situations, such as visits to the vet, or grooming sessions.

For your listening pleasure: