Warning:  I am a Cubs fan.  I was born and grew up in the Chicago area, watching the Cubs (baseball) and the Blackhawks (hockey) on WGN, the local television station.  But the Cubs recent victory in the World Series of baseball is relevant to dog training because their manager, Joe Maddon, is really all about positive training.  The Washington Post recently characterized his style of coaching as “relentless positivity”.

After the Cub’s loss in the first game of the World Series, Maddon praised the opposing team’s pitching and “acknowledged his own team’s shortcomings in a factual rather than critical manner”.  Just the way we should view our dogs’ performance in a training session or during an event – indeed, in any response to our cues. 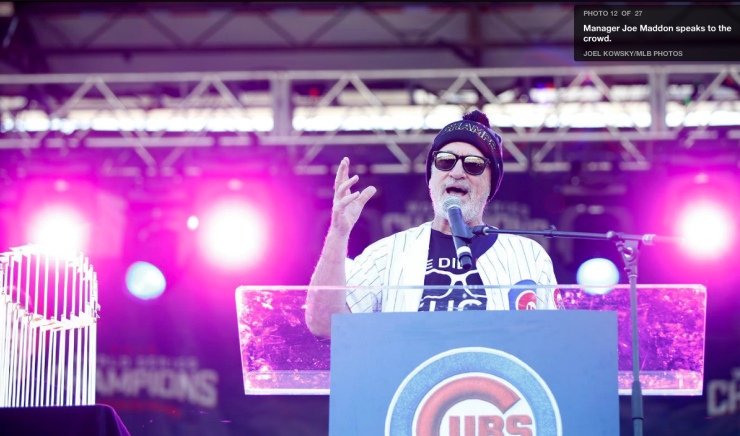 Maddon has been characterized as seeing the world through rose-colored glasses, but in fact, he sees what has really happened objectively.  “We worked good at-bats, we played really well in the field, we ran the bases well, and we lost the game.  That’s what I saw.” Maddon said after a loss to the St. Louis Cardinals last May.  Focus on the skills required for success, not on the outcome of the event.  You can’t control the outcome of the event, you can control your response to an event and your preparation for an event.

There are many skills required of you and your dog to form a successful team in the hunting field, in the agility ring, or simply walking calmly down the street.  Award-winning first baseman Anthony Rizzo said:   “Get your work in but don’t do crazy amounts of it that are unnecessary.  Do the simple things better”.  The “simple things” I take to mean the foundation skills – giving attention to the handler, responding to cues, offering behavior, targeting – the basic elements that give structure to our training sessions.  Simple, but skills that require training and underlie actions we wish to teach.

“What Maddon wants to do is create a culture that rewards players for good work but doesn’t limit their inventiveness and individuality” – and that is clicker training in a nutshell.  We want our students (dogs and humans!) to not only joyfully work for reinforcement, but to offer new behaviors or new combinations of behavior in order to earn that reinforcement.  Your dog can’t do that if he doesn’t feel safe – if the threat of punishment looms over him.  Describing Joe Maddon’s coaching style, catcher David “Grandpa” Ross said about Maddon “He makes baseball fun the way it was when we were kids.”